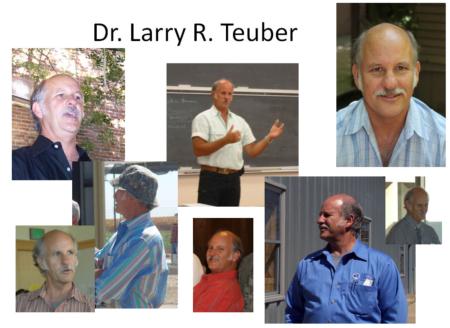 Larry served as the Executive Director of the CCIA since 2006. In addition to his important role at the CCIA, he was a Professor in the UC Davis Department of Plant Sciences where he contributed in teaching and research in alfalfa and wild rice breeding, he served as the director for the departmental Foundation Seed Program for many years, and was an inaugural instructor for the Plant Breeding Academy. Larry will truly be missed by his many friends, faculty, and colleagues.

Larry Teuber was born July 8, 1951 in Prescott, Arizona. The son of the late Ross L. Teuber, a navy veteran and forest ranger, and Clara E. (Griffith), an elementary school teacher, he grew up in the mountains of Arizona and New Mexico, until moving to Albuquerque in his teens.

He obtained his BS in Biology and his MS in Agronomy and Plant Breeding from New Mexico State University. He earned his Ph.D. in Plant Breeding and Genetics from the University of Minnesota in 1977 then joined the faculty at UC Davis as an assistant professor in the Agronomy and Range Science Department (now the Department of Plant Sciences). Part of his appointment was to work on the genetics and improvement of alfalfa for the growers of California. He took this commitment very seriously and always ensured that his research would have a practical application for growers down the line. His research centered on improvement of pollination for seed production by manipulation of plant traits that influenced pollinator activity, determination of optimum conditions for conducting selection with different breeding methods and in different environments in the state, and selection methods and markers for disease and insect resistance in alfalfa. More recently, he conducted research on gene flow and the issue of cross-contamination of non-biotech alfalfa by genetically modified crops via pollinators. He also recently set up a breeding program to improve California wild rice. As part of his strong commitment to California agriculture, he was the Director of the UC Foundation Seed program from 2002 – 2010, and the Executive Director of the California Crop Improvement Association from 2006 onward.

He enjoyed teaching the methodology of plant breeding and was passionate about passing on the utility and importance of mathematical modeling and statistics to programs of crop improvement. He was one of the three founding instructors in the UC Davis Plant Breeding Academy, established in 2006.

In his personal life, he married Suzanne (Jamond) in 1983 and embarked on multiple backpacking, cycling, fishing, kayaking, snorkeling and dive trips with her and close friends. He loved diving in the waters of Hawaii, the Monterey Peninsula, and the Channel Islands and even became a divemaster and assistant instructor. In the last 10 years, he pursued cycling. He was also skilled with mechanical troubleshooting, all tools and manner of woodworking, and enjoyed remodeling his home. The greatest joy of his entire life, however, was being a father to two wonderful daughters. He was a dedicated father, AYSO soccer referee, fixer of all things broken, tutor in the use of tools and tractors, and role model for faith in God and loving others when given a terminal pancreatic cancer diagnosis.